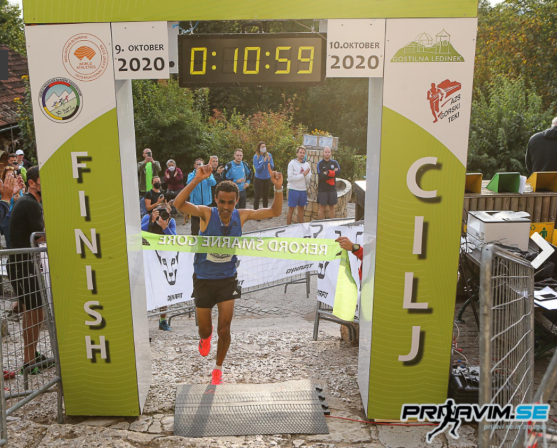 On Friday afternoon, the first leg of the 'Smarna gora running weekend' was held on the slopes of 'the most visited mountain in Slovenia'. It was the so called 'Smarna gora RECORD' where the runners take the shortest way from the foothill to the summit. 1,85km, 360m to climb. Short, but steep and tough.

The menâ€™s course record was 11:08, set in 2017 by Petro Mamu and everybody was anxious - is it possible to compete the course faster than 11 minutes? Now we know the answer: YES, it is!

Some really strong international class runners collected on the start line. Sunny 18Â°C the weather conditions were ideal for the runners, the course was dry, so all the mountain running experts expected a direct attack on the record time. Later winner, Abraham Filimon, was in the lead more or less the whole time, he had a short crisis at the Âľ of the race, but recovered just after a short flat-ish section. Smarna gora is not new for him â€“ he ran the Smarna gora race in 2017-18-19, placing every time in top five, in 2019 even in the second position. His 10:59 is a historical result. Second place for French runner Sylvian Cachard â€“ his first time at Smarna gora, but he arrived the day before to test the course and this helped him. With 11:02 he set the second fastest time on the course. Local runner with international experience, Timotej BEÄŚAN, improved his Slovenian course record by one second to 11:12.

The womenâ€™s race was not quite as exiting. Mojca Koligar was the clear favorite and she did not disappoint her fans. She was attacking the womenâ€™s record that is still in the hands of Mateja Kosovelj (13:08 from 2006), but she did not get closer than 14:28. DraĹˇler Varineja finished second and Polish Dominika Stelmach completed the podium.

The race was held under special circumstances â€“ strictly respecting the Corona regulations. All the segments of the evet, like entries, start procedure, finish arrangement and award ceremony were organized according to the recommendations of the national health institute.