We are sad to bring you the news that Bibi Anfang, pioneer of mountain running and founder of Hochfelln Berglauf, has died. Jonathan Wyatt, President of the World Mountain Running Association, would like to say a few words about him in tribute, below.

Today it is right to remember Bibi Anfang and all he has done for Mountain Running and his passion for the sport. As the president of the local ski club in Bergen he had the vision to host a Mountain Running race on the same ski slopes that is used in winter for the club races. The Hochfelln Berglauf is now one of the most historic and still prestigious Mountain Races.

My first meeting with Bibi was an invitation to travel to Bergen in Bavaria and Germany for the race. It was my first ever mountain race in Europe and I arrived at the train station with only his business card. It was enough to show this card to the person that I got off the train next to and I was taken direct to the house and hosted by the generous hearted Bibi. He was always the most passionate organiser where he firmly believed in the traditional values of tough racing on a track that stayed the same for every edition of the race preserving its history. Displaying local culture and celebrating the history of the race with the names and photos of all previous winners was always a feature of the race and we always loved having Bibi in traditional lederhosen handing out the prizes.

Bergen hosted the World Mountain Running Trophy in 2000 and Bibi pulled together the community to put on a fantastic event. My personal highlight was being a part of the bronze medal New Zealand team and seeing our New Zealand Women's team win gold at the event. Bibi was as ever involved with every detail including making sure the traditional finish chute (that is so steep you need to climb up with your hands!) was kept intact. He was instrumental in forming what we now know as the World Cup for Mountain Running joining together his race in Germany with races in Austria, Switzerland and Italy to form the first ever Grand Prix. Later in 1999 he helped it become an official part of the World Mountain Running movement.

He was so often making jokes and we both used to laugh as we did our best to understand each other. Me with my (few) few words of German and Bibi in his thick Bavarian dialect. We always managed to understand what we wanted to say to each other in the end! We will all sadly miss Bibi and his enthusiasm for our sport and on behalf of all the runners that competed at the Hochfelln Berglauf and on behalf of everyone at the World Mountain Running Association I would like to give our condolences to his family and the people of Bergen. 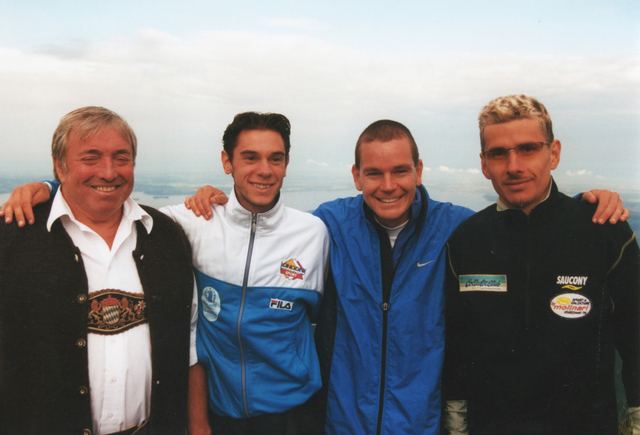