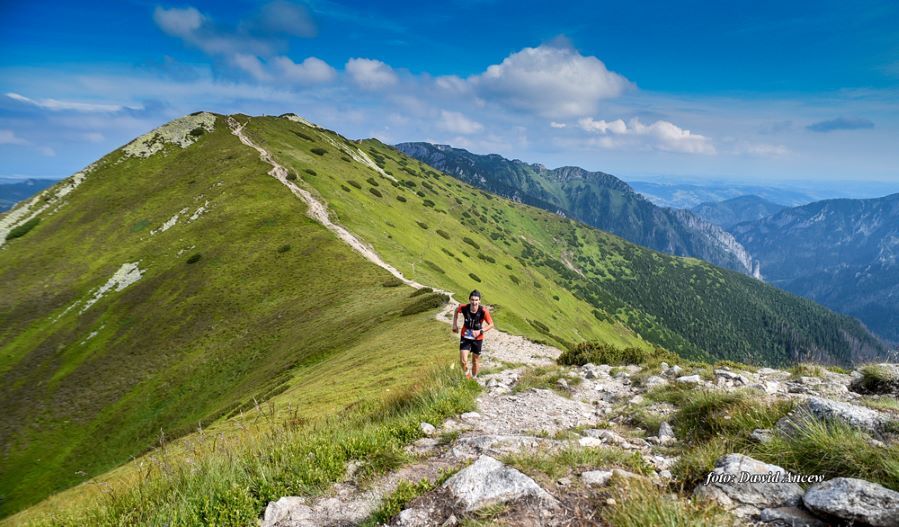 For the 4th round of the World Cup we head back to the Tatra Mountains in Poland for Tatra SkyMarathon. This is our next long distance mountain race, at 40km with 3,300m of ascent!

This year’s World Cup kicked off in the Tatra Mountains at Tatra Race Run and it proved to be a spectacular venue for mountain running. The organisers describe the terrain as ‘steep but runnable, with a rocky and gravel surface’. The bulk of the climbing in the course comes from two long ascents with over 1000m of climbing on each.

The race starts at Kościelisko, just west of Zakopane. The route begins to climb almost immediately, before reaching the high point of Krzesanica at 2096m at the 11.8km point. This is one of the four Czerwone Wierchy peaks (Red Peaks) in the region. The route then descends back down to about 1100m at Hala Ornak, the 19km point. But there won’t be any respite for the runners as they will then need to climb 1000m again, all the way up to Starorobocianski Wierch, the highest point on the course, which they’ll hit at the 26.2km mark. Then it’s down, with one final, smaller sting in the tail, all the way back to Kościelisko. A long part of the route follows the West Tatra Mountain Ridge which promises some incredible views. From the photos we’ve seen I t really does look like a fantastic route. As the organisers say, “It's fast, it's technical and beautiful. I'm sure you will enjoy it.”

There’s a strong field in both the women’s and men’s races. Some athletes who achieved success in Tatra Race Run are back for more. We’ve got Charlotte Morgan (GBR), the women’s winner, Iwona Januszyk (POL), who was 3rd, Katarzyna Fraczysta (POL), 8th, and Joanna Piatek (POL), 11th. Marcela Vasinova (CZE), who was 2nd at last weekend’s DoloMyths Run, will also be taking part, as will Katarzyna Wilk (POL), who was recently 2nd at Cortina Trail. Katarzyna Solinska will also be one to watch.

For the men Kamil Leśniak (POL), who was 8th at Tatra Race Run will be on the start line, as will Raúl Criado Sánchez (ESP), who finished 15th. Marcin Swierc, Polish champion, known for podium finishes at the CCC and TDS, will definitely be one to watch.

3 of last year’s top 5 men will return to this race this year: Peter Frano (SVK) was 2nd, Kamil Leśniak 4th, and Andrzej Witek 5th. Other strong Polish runners to watch include Maciek Dombrowski and Dariusz Marek.

The race starts at 7am on Saturday. You can follow the action live at: http://event.trackcourse.com/view/tatra-sky-marathon-2021

Or via our social media channels at: