France take the men's relay and Lucy Murigi takes the Women's individual title at this weekends Vanoni.  Some runners using it as a final tune up before this weekend's Nations Cup to be held close by in the same region of Italy's Northern mountains. 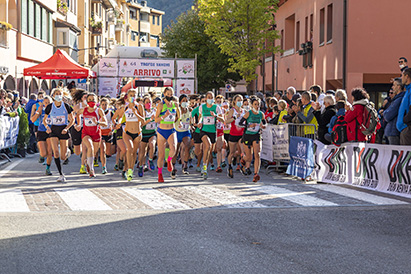 Despite being at the end of a long season, Kenyan athlete Lucy Wambui Murigi lived up to expectations.  At the top of the Dosso Barnabà, at the high point GPM, she reached the top of the hill in 13'02" with a 20" lead over Alice Gaggi (La Recastello Radici Group) and the Italian junior Luna Giovanetti (Atl. Valle di Cembra), just back from the European U20 Championships in Tallin. On the downhill the Murigi increased her lead to 30". At the finish line in via Vanoni Murigi crossed with a time of 22'04", not a record, but still a great race. Behind her, the 2013 World Champion Alice Gaggi took home an excellent 2nd place in 22'36", in front of  Giovanetti, who only entered at the last minute and she finished in 22"47." Two other youngsters completed the top five: Spela Gonza from Slovenia (23'07") and Vivien Bonzi (Gr. Escurs. Falchi Olgi23"27).
Enthusiastic at the finish line Murigi: "I'm sorry I didn't run hard enough to set a record, but the season has been long and I'm a bit tired. Winning is always a great satisfaction, especially at the Trofeo Vanoni, which is a beautiful race". Rounding out the top ten  6th place went to Corinna Ghiradi (US Malonno), 7th Samantha Galassi (La Recastello), 8th Samantha Bertolina (Atl. Alta Valtellina), 9th Erica Schiavi (Pool Soc. Atl. Alta Valseriana), 10th Beatrice Bianchi (La Recastello) 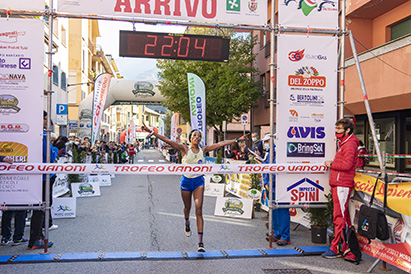 Later in the day and after last year's 3rd place and the silver medal at the Italian Relay Championships, SA Valchiese started immediately at full speed with Alberto Vender who dominated his stage and took home the best time of the day (29'00").  This after having climbed to the high point in 19'56" having already broken away from the rest of the first lap runners. 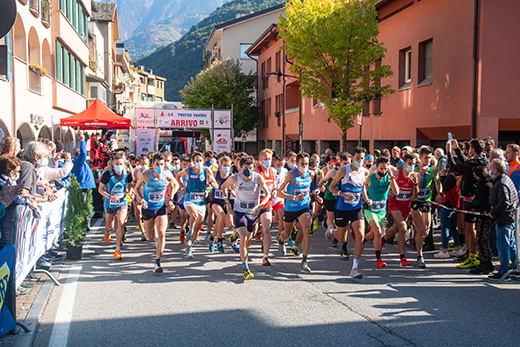 In the first lap WMRA World Cup winner Henri Aymonod arrived at the GPM in second position, but on the descent, he was caught by Slovenian Timotej Becan (the best of Vanoni 2020) and the course record holder Alex Baldaccini, while Alexandre Fine crossed the line in fifth position. On the second stage, Luca Merli had a good advantage to manage, but the top French mountain runner Sylvain Chacard reduced it gradually, bringing it from 45" at Dosso, to 15" at Bellini checkpoints.  At the changeover SA Valchiese are still in the lead but hopes of victory were taken away by Klein Theodore who, despite being at his first Vanoni at Dosso alto, had already taken 15" over Filosi, a gap that rises to 40" at the GPM in Arzo. But Filosi used all his energy and skills as a descender and in the downhill reducing the gap to 20". France score their seventh victory, after those of 2010, 2014, 2015, 2016, 2018 and 2020, with a final time of 1h30'02".  SA Valchiese is second in 1h30'14", just 12 seconds behind in the end, with Luca Merli (30'27") who is the best Under 23 and receives the prize in memory of Felice Bottani as the fastest downhill runner on the day.  Surprise of the day with a third-place was the solid trio comprised of Luca Del Pero, Daniel Antonioli and Lorenzo Beltrami in 1h 32'11". Fourth were Slovenia that after the initial strong performance of Timotej Becan consolidated their position with Miran Cvet and Klemen Spanring (1h32'42"). The top five was completed by Recastello Radici Group in 1h33'18" (Cagnati, Brasi, Ruga). In the top ten, there were five Italian relay teams (in addition to those already mentioned, the US Malonno captained by Emanuele Manzi and the GS Orobie of Baldaccini) and five foreign teams.

We tried our best, but it wasn't enough," was the comment by the second placed local team. "We came third last year, second this year, and who knows what will happen next year? The French team trained by coach Jean Claude Louison was very happy: "It's always a pleasure to come and race at the Vanoni Trophy, also because of the friendship that we have built over many years. This year I lined up a young team, they performed well and set good times. We won by a small margin but we are very happy".
A master category. went to the team US Malonno, while in the master A category the UK's Roberts Matthew, Gray Karl and Ben Mounsey (Sportshoes.com) won. "Also this year has been a great Vanoni Trohy - the words of the president of GS CSI Morbegno Giovanni Ruffoni - thanks to all those who have contributed to this success".